Components Of Bridge Cranes
The function of a crane is to move the lifted load horizontally and longitudinally in the building. The lifted load is usually supported with a hook which is cabled to a hoist. The hoist is suppor ted by a trolley which moves horizontally along the crane bridge. The crane bridge is connected to a number of crane trucks at each end depending on the capacity and span. The crane trucks can have 2, 4 or 8 wheels based on the capacity of the crane. The wheels ride along a crane rail which is supported by runway beams. The figure below illustrates the basic crane components;
1. Bridge - The Bridge is the principal structural component of an overhead crane. It spans the width of the building and comprises one or more load bearing beams or girders. These may be fabricated steel box-girders or rolled-steel joists. The bridge carries the hoist trolley, which travels along the length of the girders during operation
2. Runway - The track and support system on which the crane operates. The runway girders are usually considered a part of the building structure and are designed accordingly.
3. Runway Rail - The rail supported by the runway beams on which the crane travels.
4. End Carriage - Located on either side of the bridge, the end trucks house the wheels on which the entire crane travels. It is an assembly consisting of structural members, wheels, bearings, axles, etc., which supports the bridge girder(s) or the trolley cross member(s). Electric drive motors typically two-speed or variable-speed units power the wheels and move the crane into the required position. Brakes are mounted on the drive motors and are essential to prevent uncontrolled loads becoming dangerous, and are often electrically operated. Electrical limit switches cut power to the drive motors and prevent the crane from colliding with the building structure at the end of the travel range.
5. Hoist - The hoist mechanism is a unit consisting of a motor drive, coupling, brakes, gearing, drum, ropes, and load block designed to raise, hold and lower the maximum rated load. The hoist mechanism is mounted to the trolley
6. Trolley or Crab - The 'crab' is the 'cross travel unit' from which the hook is lowered and raised. A top-running trolley on a double girder crane runs on rails fitted to the top of the crane bridge. An under hung trolley on a single-girder crane runs on the bottom flange of the crane beam, with drive units connected directly to the trolley. The trolley carries the electric wire rope hoist that supports the load block and hook through a system of pulleys. A variable-speed AC motor on the hoist drives the load up or down. Limit switches prevent the load block from colliding with the trolley.
7. Controls - Controls for an EOT crane are usually mounted in an operator pendant or remote console and comprise various push buttons and switches that operate relays and contactors mounted on the crane. Drive motors and the hoist motor draw substantial l currents during operation and require appropriately rated contactors to switch them on and off. Variable frequency inverters provide speed control for motors where accurate positioning is essential. A master contactor is triggered by a main switch and cuts off all power to the crane if a dangerous situation occurs.
8. Electrical Requirements - Ideally 440 volt, 3 phase, 50 hertz for US requirements. The runway power is usually by a conductor bar, and a hoisting trolley by festoon cable. The control circuit voltage at pendant pushbuttons shall not exceed 150 volts for AC 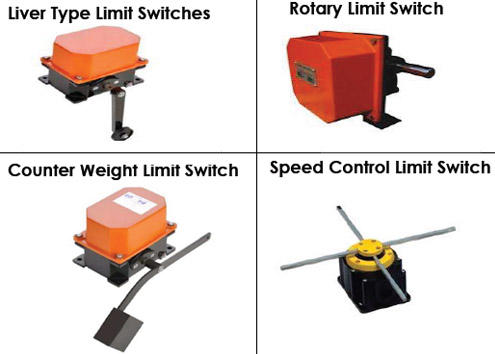 Counter Weight Limit Switch - Gravity limit switch works on the basic principle of weight balance scale where One counter weight is mounted at one side of the lever and another suspended weight is tied at another end of the lever.

Working principle of Gravity limit switch - At the center of the lever a Shaft is present with attached Coaxial cams . The lever shaft and cams, all rotate simultaneously at the same angle. These cams are responsible for changing the state of electrical contacts position, placed inside the limit switch enclosure. Electrical Output wire is fed to crane control panel

Liver Type Limit Switches - A lever type crane limit switch works on the principle of a lever attached to a rotating central shaft. When the moving machinery comes in contact with the lever, the central shaft of the lever rotates, thereby rotating the coaxial cams which connect or disconnect the electrical contacts. The rotation of the shaft can be spring returned to its stable normal position. The length of the lever type crane limit switch depends on the mounting position of the limit switch enclosure and the moving crane which needs to stop. The Lever mechanism can be moved one way or both ways depending on the type of application. Lever type Limit Switch is prevent over travel of traverser motion within pre specified position on control or power circuit. Lever Type Limit switch is Suitable for use on Wagon shunting device, Elevators, Material handling system etc. 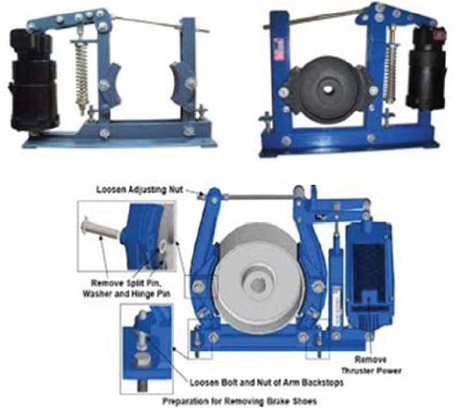 3 Phase electric motor Piston
Closed type of impeller, which will be driven by electrical motor Oil sump, transformer oil will be used in thruster oil sump to work as working fluid 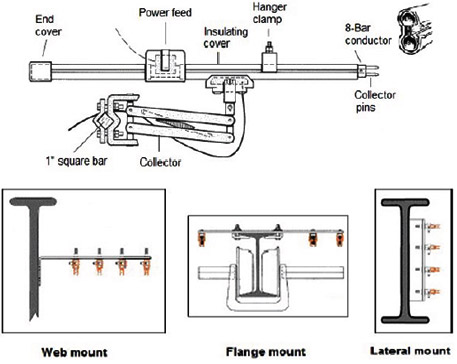 Shrouded Bus Bar system
Power supply to the runway electrification consist of a series of insulated bars made out of galvanized steel, copper, stainless steel, or aluminum, which transmit electricity through sliding collector assemblies that power the motors, trolleys, hoists, etc.
• Conductor bars shall be one piece, copper conductor s complete with thermoplastic insulating covers and end covers. The insulated bars are also called 8-bar systems because the bar inside the insulation, when viewed from the end, looks like the figure 8. Conductors shall be accurately aligned to ensure positive electrical contact between the collectors and the conductors. Separate conductors shall be provided for each phase, and more than one conductor in a single enclosure shall not be permitted.
• Maximum voltage drop from the building power takeoff point for the track electrification system to the hoist motor shall not exceed 5- 10 %, and the equivalent conductance shall not be less than No. 4 The size of bridge conductors shall be proportioned to limit the total voltage drop in the conductors to a maximum of 3 percent of the supply voltage when the current on the individual motors is on full load.
• Short-circuit current rating of conductors shall be not less than 10,000 amperes. 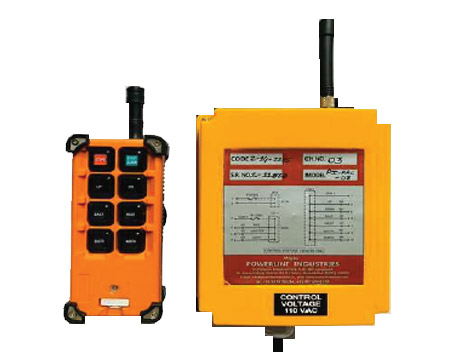 Pendant Control Station
Push button Stations are suitable in a circuit of AC50 Hz, rated voltage up to 500V and rated current up to 5A
They are available in versions containing from 4 to 10 buttons, size and inside space tested to allow fast cabling, thus reducing time and costs
Pendants are designed for Control Circuits, Dual Speeds, Mechanically Interlocked, Reset Button + Latching Emergency Stop.

Variable Frequency Drive
The AC-induction motor can have its speed changed by changing the frequency of the voltage used to power it. ... According to the variable frequency drive working principle, it's the electronic controller specifically designed to change the frequency of voltage supplied to the induction motor.
AC drive installations running smoothly. AC drives change the speed of ac motor by changing voltage and frequency of the power supplied to the ac motor. In order to maintain proper power factor and reduce excessive heating of the motor, the name plate volts/hertz ratio must be maintained. This is the main task of VFD. AC drives basic
Working Principle:
AC drives are used to steeples speed control of squirrel cage induction motors mostly used in process plants due to its ruggedness and maintenance free long life.
AC drive control speed of ac motor by varying output voltage and frequency through sophisticated microprocessor controlled electronics device.
AC drive consists of Rectifier and inverter units. Rectifier converts AC in DC voltage and inverter converts DC voltage back in AC voltage. 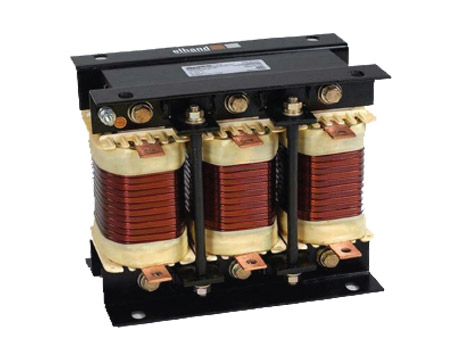 AC Drive Line Choke
When an AC reactor is placed between the power system and the drive, it is referred to as an AC line reactor. Reactors can prevent overvoltage trips, increase the reliability and life span of the VFD, improve total power factor, and reduce 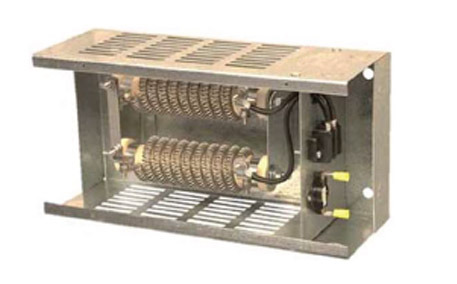